The next round of A Tattered Page begins on January 7.  The merchant list is now up and you can find it here. As soon as we have a SLurl for the Library, we’ll give it to you.

In the meantime, keep watching the skies.  Or whatever science fiction cliche you want to use.

Tomorrow night we’ll be sending out the merchant stuff for ATP round two.  If you’d like to apply to this round, you have about 24 hours left to do it.

As promised, apps for ATP2 are now open.  The book is Ray Bradbury’s The Martian Chronicles.

Please take the time to read the rules/FAQ as some of it has changed. 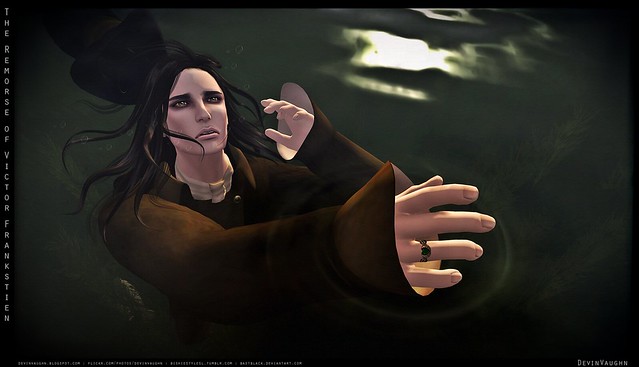 The Remorse of Victor Frankenstein, by Devin Vaughn.

And so, the book closes on the first round of ATP.  This was such a huge learning experience for all of us, and we’re now looking forward to our next round with a new set of strategies.  We want to thank everyone who participated in this round and was so patient while we attempted to work it all out, and to our blogging team who were truly, truly outstanding through all of it.

For our next round there will be some changes to the format.  Most importantly, we will have both a location AND an in-store thing going on at the same time. The notion that a central location would siphon traffic from the mainstores just isn’t true. People that prefer location events just don’t *go* to mainstores either way.  More details on that when we have it.

Marketplace will remain an option, but will by no means be a requirement. I will *NEVER* require MP listings.  There’s a lot of reasons not to do them, and not very many to bother, so this will just remain an optional thing, but the truth is that as we expected, there is *absolutely no validity* to the notion that if event stuff were ON MP there would be a flood of people to get it.

Let me make that clearer:

There is absolutely no validity to that idea.  None. Zero. Nada.

We will be dropping the exclusivity requirement. It’s not worth it- I don’t actually LIKE exclusivity requirements. Next round that will be changed to “new item”, and merchants can just pick one color to throw the split script into.  If they ***WANT*** to make exclusive colors or items they can? But they don’t have to.  This is in line with all of our other events. We probably shouldn’t have messed with it- it worked perfectly the way it was.

For the next round, the number of merchants will remain the same. We are not yet at a point where we think the scope of the event needs to get bigger.

My understanding is that blogger stuff will remain the same as it is now- that part seemed to work out perfectly.

The next round’s applications will come out later today, along with the book announcement, of course.

Thank you all so much again- we really learned a lot, and we hope you enjoyed reading along with us.  -AK